Docker is an open-source software platform that allows users to design, deploy, and manage virtualization application containers on a shared operating system (OS) using a set of tools. Docker container technology first appeared in 2013. Docker Inc. was founded to provide a commercial version of container management software while serving as the primary sponsor of an open-source version. In November of this year, Mirantis bought the Docker Enterprise company.

The hosting platform for the apps has changed a lot throughout the years. We started with mainframes and physical servers a long time ago and then transition to virtualize environments in the late 1990 and early 2000. Many Platform-as-a-Service and Software-as-a-Service solutions are being developed by public cloud platforms such as Azure and AWS to revolutionize application hosting platforms. Simultaneously, modernizing classic computing services, such as Virtual Machine Scale Sets, gives virtual machines cloud-native features. As a result, you’ll be able to create a scalable application that can adapt to changing workloads.

On Microsoft Azure, we’ve made it even easier to get started with Docker containerization today. Users will be able to inject a Docker engine into any supported Linux VM at any stage after provisioning using our extension mechanism – see details here. The new capability we’re announcing today makes getting started and running with a Docker engine on Azure Virtual Machines even easier. It’s another step in our commitment to the Microsoft-Docker partnership we announced last October. It paves the way for more Docker ecosystem integration, such as Docker Hub, with Microsoft Azure Marketplace.

In this case, our docker host machine is a virtual computer in Azure. As a result, on the Azure site, build a virtual machine with the following specifications:

Size – Standard D2s v3
OS – Windows 10 Enterprise version newest (Some sizes do not support hypervisor capability; it will not immediately tell the size, but you will be unable to start the Docker.

Create a Docker account
From the hub, download and install Docker.
It will prompting you to log out and back in at the end of the installation.

Wait a minute after logging in to receive the notice asking you to activate hypervisor. Please wait for the hypervisor to auto-restart after enabling it.

Installing Docker on an Azure Virtual Machine and Using Docker

Log in to the VM and wait for the Docker desktop icon to appear. In 2 to 3 minutes, Docker will appear to be operating. Installing Docker in an Azure Virtual Machine.

Now that Docker is installed and operating in an Azure VM, you can proceed to the next step. Run the docker version command from the command prompt to verify this. 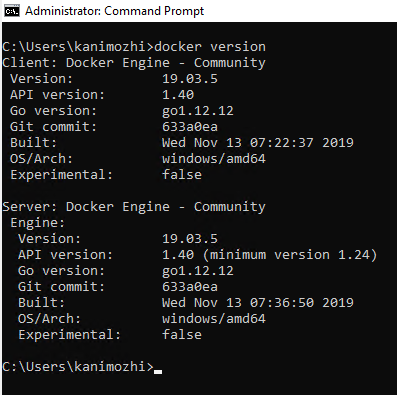 To put it simply, you have a host (which may be a real or virtual system), and you will be installing Docker on top of it (containerization platform). You’ll be developing containers with Docker (contains the actual application components to run the application).

If you need further guidance regarding cloud management,  Get Your Free  Consultation.