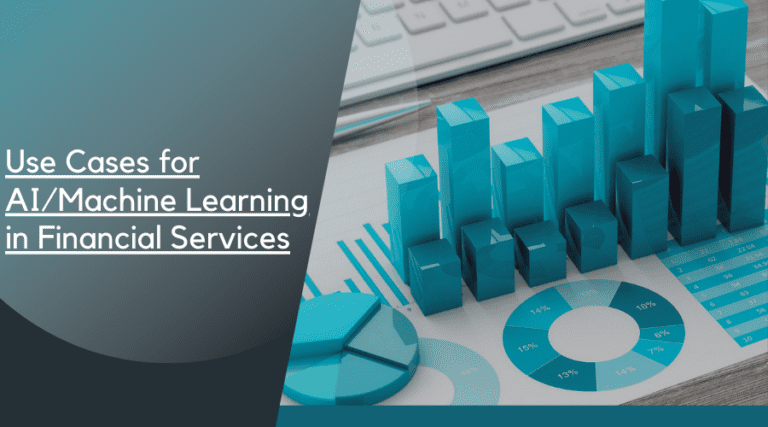 Use Cases for AI/Machine Learning in Financial Services

Just 30 years ago, you had to wait days for a bank to approve your loan. Or spend weeks dealing with the bureaucracy of your insurance company just to get reimbursed after a minor car accident. These processes take less than a day because documents are submitted and processed online with little or no human interaction. This article will introduce several technologies that promise to change the entire business concept in the financial world.

Is artificial intelligence just a buzzword to put on your landing page or a use case worthy of innovation? The answer is Both. We will, of course, talk about real-world examples of AI being used in different areas of the financial industry.

In 2018, Gartner found that companies that implemented machine learning into their customer service workflow saw a 70% decrease in the phone, chat, and email inquiries. A typical example of machine learning improving customer service is chatbots. Chatbots are relatively inexpensive to implement and allow customer service 24/7/365, which is difficult for human-led teams to achieve. According to a study by Zendesk, chatbots also reduce customer interaction time and improve overall customer service, which is critical to overall revenue. Zendesk found that 42% of customers are more likely to return if they have experienced good service, while 52% do not complete their purchase after a single bad service.

Outside of chatbots, machine learning can be used to analyse information about the caller to find out if they have shopped in the past, if they spend a lot of money, and other characteristics to match them to an agent who has the best skills to help them. It can also counter churn by analysing recorded calls for changes in tone to determine when and why a customer was frustrated.

Detecting fraud in real-time is essential for financial institutions to reduce costs. The Association of Certified Fraud Examiners (AFCE) found in 2016 that the average annual cost of fraud to an organization was $150,000, with 23% of those organizations suffering losses of more than $1 million. Similarly, in 2019, the FTC reported that 1.4 million customers were victims of fraud in the previous year, resulting in $1.5 billion in costs. However, it’s not only essential to recognize fraud, but also to properly diagnose it – MasterCard reported in 2016 that 1 in 3 customers who were incorrectly identified as fraud victims would not return in the future.

These systems use continuous monitoring, detection, and learning cycle to make predictions. This allows fraud detection systems to work in real-time and stay on top of the latest information. These systems learn and make predictions using various machine learning models. The most common models for fraud detection are Random Forests, Support Vector Machines, K-Nearest Neighbors, and neural networks. An excellent example of a company using a machine learning-based system is PayPal. They use an ensemble of a linear machine learning model, a neural network, and a deep neural network to distinguish suspicious transactions from secure transactions. These suspicious transactions are then routed to another workflow to undergo additional verification steps.

You can track current market trends by browsing news and publications throughout the day, hiring someone to do it for you, or using sentiment analysis. This methodology analyses text sentence-by-sentence and distinguishes between positive, negative, and neutral meanings. In trading, sentiment analysis tools analyse market sentiment and mentions of companies in an investor’s portfolio, whether in the news or on social media.

Sentiment analysis helps traders and investors predict trends, and there are solutions specifically for this market. One of the examples is Catana Capital, a trading prediction tool that processes news articles, tweets, and blogs.

Credit risk is the economic loss that results from a counterparty defaulting on its contractual obligations or from the increased risk of default during the transaction’s life. This is evident in the growing market for credit default swaps, where many uncertain elements surround the probability of credit default and the cost estimation in the event of a default.

Find out how iSmile Technologies can help you design and develop new solutions that leverage today’s most advanced AI/ML technology.