The COVID-19 pandemic has impacted the overall automotive industry, compelling automakers to cut down the output at their production plants. COVID-19 has also impacted the operations of many OEMs, from production to R&D creating short-term disruption delaying autonomous cars deployment and rollouts.

The recent technological advancements in the fields of artificial intelligence, machine learning, and other sensors like RADAR, LIDAR, GPS, and computer vision, have enabled manufacturers to increase self-driving capabilities in cars. Though there are varying levels of autonomy, major players are working towards more advanced control systems integrated into the car that can interpret the sensory inputs to detect signboards or avoid collisions. 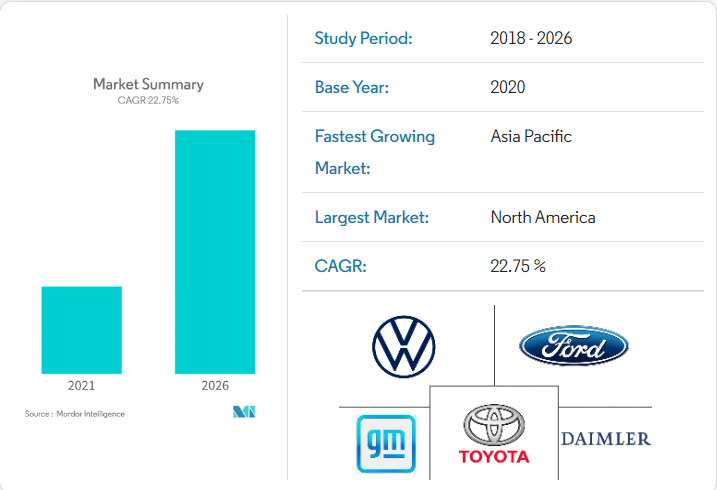 Many players from the hardware to software firms in the automotive industry have started focusing on entering into the growing trend of autonomous driving technology. Thus, partnerships, collaborations, and investments toward developing autonomous vehicles increased significantly in the automotive industry over the past three years (i.e., 2018-2020). They are likely to continue growing during the forecast period, primarily due to the increasing support from governments and private sectors across several countries to promote autonomous driving vehicle technology.

In January 2021, Automotive Grade Linux announced that it had included Aicas, AVL, and Citos as new Bronze members. AGL is an open-source project at the Linux Foundation that brings together automakers, suppliers, and technology companies to accelerate the development of all technologies related to vehicles, including autonomous driving.

Similarly, in January 2021, the automotive technology company, Veoneer, Inc., and Qualcomm Technologies, Inc. have signed an agreement under which the companies will collaborate on the delivery of scalable Advanced Driver Assistance Systems (ADAS), Collaborative and Autonomous Driving (AD) solutions.

Unlike competitors, which are slowly ramping up autonomy systematically from Level 2 to 3 to 4, Ford aims to jump several steps and go right to Level 4. According to the experts, the price is the leading factor for this decision.

AUDI
In January 2017, Audi announced that it has plans to launch its highly automated vehicle in  2020 and a level 3 vehicle by the end of 2017. The company announced to use NVIDIA’s AI  technology in its autonomous vehicle. In 2017, Volkswagen-owned Audi started a new  subsidiary focused on autonomous driving. This new unit is named Autonomous Intelligent  Driving and it works for the entire Volkswagen Group

NISSAN RENAULT
Nissan is one of the first movers in the segment and  started the initiatives as early as 2013. It   unveiled its first public prototype in 2013 at the Nissan 360 event in California and  announced that it will launch a highly automated vehicle by 2020. Since then it has been  testing an autonomous Nissan LEAF on the roads of Tokyo and Detroit

TESLA
In April 2017, Tesla’s CEO, Elon Musk, confirmed that Tesla will be able to launch a Level 5  vehicle within the next two years, depending on software validation and regulatory  updates.

It is the most aggressive timeline provided by any other automaker. Elon Musk also said that  by the end of 2017, Tesla will bring a car that can drive itself from Los Angeles to New York  City, no human needed. Today, Tesla has 80% of the market share.

BMW
In March 2017, BMW announced its plan to launch Level 5 autonomous cars by 2021. The  primary aim of BMW is to gain a competitive advantage in the space by launching a level 5  autonomous vehicle while most of the other competitors are running for level 4 cars.

HONDA
Honda is comparatively less vocal about autonomous cars. On the other hand, it has indeed  taken strong steps towards testing and launching driverless cars. Honda has been roiling out  semi-autonomous functionalities, comprising forward-collision warning, lane- departure  warning, and lane-keeping assistance.

TOYOTA
Earlier Toyota was reluctant to launch an autonomous car; however, since Mid-2016 it took  a completely different approach to the autonomous vehicle. It now spends nearly $10 billion  a year on researching autonomous vehicle technology.

APPLE
In 2016, Apple confirmed for the first time that they are working on self-driven cars. It also  announced its investment in machine learning and automation. This project is internally  known as Project Titan and started in 2014. However, the company is less vocal about its  autonomous car projects.

Apple holds the record for the 3rd largest fleet of self-driving test vehicles in California, just  behind Waymo and GM with 135 and 258 cars, respectively. Its interest in the self-driving  industry is still a mystery, with reports saying that Apple intends for the technology to be  used within the company. Others speculate that the tech giant is planning to compete in the  self-driving market in the future. Apple has recruited an additional 33 drivers for its  autonomous car project. According to a report filed with the Department of Motor Vehicles  of California, Apple now has 143 pilots for their autonomous system evaluations on Lexus  SUVs equipped with self-driving technology.

MICROSOFT
Microsoft is taking a different approach to autonomous vehicle technology development. It aims to collaborate with carmakers to implement its autonomous technologies. According to the senior management of the company, it has no intention to make its own autonomous vehicle. Some of the popular Microsoft solutions that might be used in such cars include the Azure cloud platform, Office 365, and the Windows operating system. The company already provides software for Ford, Kia, BMW, Nissan, and Fiat.

INTEL MOBILE EYE
Intel, of course, has been keen to push into the sector, having been beaten to the   punch by companies like NXP and Nvidia to supply automotive silicon and autonomous  processing power.

WAYMO ( GOOGLE )
Waymo is the top contender to be on the list of top autonomous vehicle companies. The  company has been working on driverless car technologies since 2009. Initially, the project  was named as Google driverless car project. In December 2016, the new unit Waymo was  formed as the subsidiary of Google’s parent firm, Alphabet. Waymo’s self-driving  technologies have gone through millions of miles of test drives already in US cities. Waymo  cars had 1 billion simulated miles of test driving in 2016.  However, Waymo’s effort got a  regular halt due to the departure of project engineers and leaders including founding  member Chris Urmson.

NVIDIA
Nvidia is one of the leading chip-makers in the autonomous vehicle space today. Many  automakers have already announced to use of systems from Nvidia in their self-driving cars.  Some of these include Audi, Mercedes Benz, Toyota, and Tesla among others.

SAMSUNG
In May 2017, Samsung received approval from the South Korean Ministry of Land,  Infrastructure, and Transport to test autonomous vehicles on Korean roads. Samsung’s self- driving cars are based on Hyundai vehicles equipped with cameras and sensors. In the  autonomous car segment, Samsung’s primary competitor is Apple.

HUAWEI
Chinese telecommunication giant Huawei has shifted resources toward the development of  autonomous vehicles in recent years. It has published a white paper explaining the ways in  which mobile network operators could prove to be valuable to the connected car space.  Some of these areas include smart parking, fleet management, data related to in-car  entertainment, LTE-based emergency services, and more.

BAIDU
Baidu, which is also known as Chinese Google ramped up its autonomous car initiatives since  2014 when it opened its first AI lab in Silicon Valley. It has a dedicated Autonomous Driving  Unit (ADU) that is based in Beijing and Silicon Valley and takes care of the company’s  autonomous car efforts.

DIDI CHUXING
Didi Chuxing is one of the largest transportation networks in China. The company is also  expanding its business in other parts of the world such as Southeast Asia, India, and Brazil.  Presently Didi Chuxing is shifting its gear towards self-driving cars

However it plays out, these vehicles are coming—and fast. Their full adoption will take decades, but their convenience, cost, safety, and other factors will make them ubiquitous and indispensable. Such as with any technological revolution, the companies that plan ahead, adjust the fastest, and imagine the biggest will survive and thrive. And companies invested in old technology and practices will need to evolve or risk dying.

Once just a far-off dream, driverless cars are now technologically feasible and may be coming to a street near you sooner than later. Autonomous cars are sure to disrupt the automobile and related industries, seriously hurting the bottom line of those companies who are not quick to adapt. At the same time, the benefits to society and the macroeconomy will be positive and significant. There will, however, be a smaller few who become displaced by the new technology and will not benefit from the larger societal gains.

Owning a driverless car in the next 10 years is less likely – it’ll still be too expensive for most people, according to Hynd. But the promise of driverless technology is about unchaining us from our reliance on cars, and how that can transform the use of our time and our environment.

Much in the same way that electric charging stations have slowly entered car parks, side streets, and service stations, so too will autonomous vehicles eventually make their way into our everyday worlds. Years from now, we may well be wondering how we ever lived without them.